I have been a Montessori Trainer at The Center of Guided Montessori Studies for more than a decade. This experience was inspiring and enriching, which I will always treasure. I have learned a great deal from fellow trainers and adult students as well.

Somersfield Academy in Bermuda had been the birthplace of my Montessori journey for 23 years. I have grown and blossomed academically with them. In return, I have implemented Peace/Virtue education, which became a big part of the school’s overall culture. By nurturing the child’s spirit, we are fulfilling Dr Montessori’s great desire to create a better world for the whole of humanity. I have dedicated more than two decades of my life to exploring spirituality and passing this knowledge to both parents and fellow teachers because it is vital for children to be in the care of adults who live day to day in spiritual awareness.

I have completed multiple courses for a doctoral degree in Early Childhood/Montessori Education from Walden University, and I have acquired a master’s in early childhood education/ Montessori from Xavier University. In 2017, I retired and started a new expedition of helping refugees and their children.

Training refugee women to become Montessori teachers has become the focus of my life and a source of immense pleasure for both the women and myself. I established a few Montessori classrooms in Turkey and Jordan that serve as training facilities for the trainees to apply their knowledge by working on the Montessori materials with the children. Additionally, I joined forces with “HADAYA”, an American based charity, to raise money for equipping the classrooms and supporting the interns until they become certified Montessori teachers. My mission is to spread Montessori Education to the world. 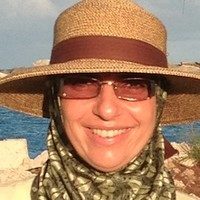