Julie has been associated with CGMS for eleven years, serving adult learners in the capacity of instructional guide, practicum advisor, and field consultant. She began her professional journey many years ago as a third-grade teacher in a traditional environment, while also owning and teaching at her own dancing school. During her husband’s doctoral residency, she taught music in Ann Arbor, MI, and, as part of a teacher-in-service day, happened to observe at a Montessori school. She was so taken by the atmosphere of the environment, the interactions of the adults and the children, and the independence of the children themselves that she decided that, when she had a child, he would attend a Montessori school. Years later, he did! She, as a parent, shared his experiences and quickly became enamored of the Montessori philosophy.

Having received her AMS Primary Montessori Certification through the training at the Northeast Montessori Institute, Julie was a directress at the primary and elementary levels for schools in New England, OH and AZ, an administrator for two primary schools and one elementary school, a teacher educator at the Columbus Montessori Teacher Education Center in Columbus, OH, and an Assistant Professor in Early Childhood Education at Ohio Dominican University where she developed and instituted an integrated program between CMEC and the university. She was graduated from the State University of NY at Fredonia, NY, with a Bachelor of Science in Music Education and a Master of Science in Elementary Education.

In the interstices of these activities she served in the role of faculty/dean’s wife, ran a stenciling/craft business, sat as President and Board member for various garden clubs, women’s clubs and children’s choruses, sang in church choirs, and raised a son who had a career as a professional boy soprano with various national opera companies. She and her husband now reside on Cape Haze, FL, in the winter and summer in Scarborough, Maine. She enjoys the beautiful beaches and flora and fauna of the North and South. 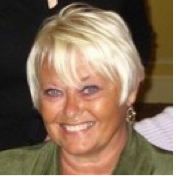