Jana’s been involved in Montessori education since 1992, first as a parent sub then as a teacher, school director, teacher trainer, and Director of Training for VMAT, an IMC/MACTE teacher education program. She travels internationally, presenting, training teachers, and working with parents. Jana has a BA in Literature, a Master’s in Montessori Education, and is a co-founder of The Kentucky Montessori Alliance. Jana loves CGMS because of the work they do around the world helping to make high quality Montessori training accessible anywhere there’s an internet connection.

Jana teaches Women’s Literature and African American Literature at Indiana University Southeast. She moderates numerous Facebook groups and pages, including a 9500 member Montessori parent Facebook group, and is a co-moderator for Montistory, a page devoted to sourced quotes and historical pictures of Montessori classrooms. Jana developed a course for parents who wish to use Montessori principles at home called Montessori Homeschool by Design on the Trillium Montessori website. She is a co-author of the Montessori Parent Coronavirus Survival Guide and numerous articles for parents and teachers. Jana holds additional certification in Montessori and Dementia Care. as well as the Coaches Training from NCMPS.

Montessori is a way of life for her family. Her husband, Kyle, also instructs for CGMS and teaches secondary Montessori learners, her sister is a CGMS elementary trained teacher, her daughters attended only Montessori schools from 18m- high school (and now work at a Montessori school) and her grandchildren attend Montessori school! She loves her family, camping, and traveling- especially to the beach. 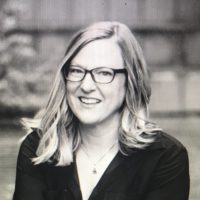