Dr. Cindy Acker is a six-time award winner for her education and support of children, including LGBT families and families of diversity. She is a published author, keynote speaker, former president of one of California’s preschool associations, former vice president of the National Child Care Association and a public policy adviser for schools in California. Cindy holds two bachelor’s degrees (education and human development), two master’s degrees (educational leadership and cultural studies and spirituality) and is a UC Berkeley graduate with a doctorate in educational leadership. Cindy leads international workshops on race, diversity and inclusivity and is a member of the Alameda Collaborative for Children, Youth and their Families.

Her roots originate from Sierra Leone and she speaks Dutch and Spanish.  Her family is multiracial, and she has two adopted brothers, and two grandchildren (one who is German-African American and one who is Mexican/European/African American.  She is a choir director in Novato, and former choir member of the Glide Ensemble and the Oakland Interfaith Gospel Choir.  She is principal of Montessori Elementary School of Alameda and The Child Unique Montessori School, which was featured as one of two schools on the PBS Newshour for its work on building equitable diverse school curriculum.  Cindy is a social justice playwright and her play on the history of the desegregation of schools (Words That Made the Difference: Brown vs. Board of Education) continues to travel nationally and to stream internationally. 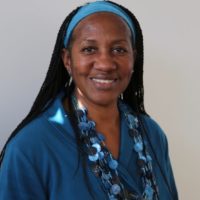